Reviews of the concerts at Musikverein (22.10.2022) / 3rd Rachmaninoff with Alain Altinoglu and the hr-Sinfoniekonzert - Alexander Malofeev 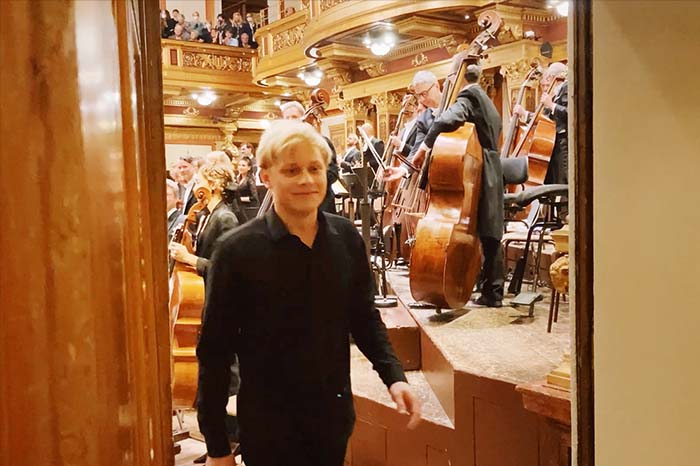 Reviews of the concerts at Musikverein (22.10.2022) / 3rd Rachmaninoff with Alain Altinoglu and the hr-Sinfoniekonzert

The astonishing, overwhelming debut of the pianist with the Frankfurt Radio Symphony and Alain Altinoglu at the Musikverein
There are evenings when the clocks are reset.
What was before is history. From now on: everything new.

Alexander Malofeev’s performance at the Musikverein on Saturday was quite the evening: a world piano revolution. Alain Altinoglu and the Frankfurt Radio Symphony Orchestra were to perform their two Vienna concerts with two of the most exciting current younger pianists: Khatia Buniatishvili (35) and Daniil Trifonov (31). The Georgian-born woman had to cancel due to illness, so Altinoglu contacted a young man with bleach-blond hair who had been celebrated a month earlier at the Alte Oper Frankfurt as a replacement for Evgeny Kissin: Alexander Malofeev. The 21-year-old, currently on tour in the USA, boarded a plane with the sheet music of Rachmaninoff’s third piano concerto in his luggage. The rest is already legendary.

Cheers of delight.
After the finale, a rush of exhilaration flooded the Musikverein Hall. Standing applause and cheers of delight – that must be the case when Wolfgang Sobotka resigns as President of the National Council. Initially, Malofeev played the final movement with an unstoppable relentlessness, a positive obsession, with a fortissimo forged in a blazing inner fire. The pianist, who was trained in Moscow, would not think of making a showy Ballermann – his interpretation is carried by a constant emotional seriousness. Sentimental producer of Rachmaninoff? Not with Malofeev. As if by magic, the artist created suspended, almost surrealistic sound worlds. And the finale of the finale: as if a squadron of supersonic planes had boarded over the Musikverein Hall – refuelled not with kerosene, but with pure euphoria.

Malofeev started the expansive d-minor concerto in the complete opposite way: seriously, almost coolly, he presented the simple, long-spun first theme, followed by the accompanying arabesques in a matter-of-fact manner. A closed artist? Far from it. The Russian presented the lyrical theme, the finest Rachmaninoff, in a pensive, calm, entirely understated manner. Then he let the melodic voice blossom for the first time, and it grew in a refined manner into grandiose, velvet-lined wistfulness.

Radicality, as hard as it is tender.
But then. Like an act of violence, the cadence broke into a comforting world of sound. Malofeev started it hard and harsh: an existentialist struggle that was to increase to brutal radicality. An assault in tones. Once the shock had subsided, the pianist soothed any battered nerves with his E flat major rendition of the lyrical theme, as delicate and intimate as the most innocent love.

As with all great pianists, Malofeev gave the impression that his sleepwalking natural ability with the technical side allowed him to play with spontaneity and ease. He does not play notes, he creates emotional realities that are so magical, so diverse and intense that they pull the ground away from under your feet and take your breath away. He often looks openly and calmly into the audience, and seems completely free. Visually, Malofeev is less reminiscent of a classical pianist than of a lead singer in a new wave band who accidentally strayed onto a concert podium and is now doing his thing here.

The Steinway sounded like a dulcimer.
The euphoria had not subsided when Malofeev gave two encores. After the confrontation with this exceptional artist, the Steinway unfortunately only sounded like a disgruntled, broken dulcimer. Regardless. Because it would have been impossible to follow the second half of the concert with a reasonably clear knock and a calm heart after this world piano revolution.
Malofeev won the youth edition of the Tchaikovsky Competition in Moscow in 2014, and according to Frankfurt Radio, the pianist now lives in Berlin. He toured the world with renowned orchestras, making his debut this year at the summer festivals of Verbier, Tanglewood and Aspen. On 29 November, Malofeev can be seen in a solo recital at the Brucknerhaus in Linz. And hopefully back in Vienna next season at the latest.

🔷 Die Presse: A revelation from Moscow at the Musikverein.

Pianist Alexander Malofeev, who joined us at short notice, thrilled the audience together with the Frankfurt HR Symphony Orchestra.
Two days earlier in the USA, now already in Seoul, and in between his debut at the Musikverein: there, the only 21-year-old Alexander Malofeev from Moscow saved the first part of the initial guest evening of the Frankfurt HR Symphony Orchestra at the Musikverein with his last-minute stand-in for Khatia Buniatishvili. If he had not agreed, instead of the Third Rachmaninoff’s Piano Concerto, another work would have had to be chosen — and that would have prevented a revelation. Because Malofeev is a revelation.

He made a magnificent impression with his excellent technique and, first and foremost, with his subtle touch on the piano: he is a lyricist with a sense of rapture. That is how he performed the difficult solo part of this challenging concerto without pushing its virtuosity into the background. He captured the audience with his naturalness and freshness, and wisely chose the encores with which he rewarded the frenetic cheers. He chose pieces that were ideally suited to this Rachmaninoff, both stylistically and pianistically: a Tchaikovsky paraphrase penned by Malofeev’s older pianist colleague Mikhail Pletnev and a no less challenging little opus by Nikolai Medtner. Breathtaking.

When the Golden Hall of the Musikverein palpably lifts the audience to the firmament on Saturday evening, this is also thanks to Alexander Malofeev: he plays the solo part in Sergei Rachmaninoff’s Third Piano Concerto – a Herculean task for every pianist.

The 21-year-old is stepping in at short notice for Khatia Buniatishvili, who has fallen ill. In other words, the blond was flown in from the USA. And, with every repetition, he plays the catchy, sorrowful theme intimately and anew, with enthusiastic physicality, emotional purity, tonal power and brilliant technique – and all this in under 45 minutes. A captivated audience, dazzled as if by the beauty of the very first day on earth, and with tears in their eyes as if there were no tomorrow, thanks Malofeev with a standing ovation.